YHC is a huge fan of old school stuff — but not the movie, hasn’t seen it.  Little Debbie, sausage-and-egg biscuits, old school wrestling (or wrasslin’) and old school, big-group workouts.  For the last one, YHC has often seen backblasts where the PAX count was 2-4, but he started out with the big Dromedary and Cuthbertson workouts of 20-30 PAX and has often been leery of any turnout fewer than 10.

With the high potential for rain and storms, YHC knew today might be one of those days.  He rolled into Rea View about 5:15 (or so he claims) and sat in an empty parking lot watching the rain from Hurricane Sally dot the windshield.  About 5:27 headlights shine down the road, and a minute later there’s another pair.  Neither was the Q, but there was a quorum.

Some of the best wrestling of the 1980s were the 6-man tag team matches.  The Fabulous Freebirds, the Von Erichs, Road Warriors and Dusty Rhodes.  This mighty trio teamed up in the gloom for a 3-on-1 match versus Sally.

The PAX quickly decided to split the Q and make the most of the morning.

Das Boot with the warm-o-rama

Midriff offered up some rock work with running

Chopper took the leg work with lunges, squats then running.

Das Boot came back into the squared circle for some Mary to finish it up.

Just as opponents trembled when Hawk, Animal and The American Dream strolled into the ring, Sally ran with her tail between her legs.  For 45 minutes, it barely rained and the time flew.  The workout was a solid one and no one melted from the little precipitation that fell.

More than that, though, YHC has heard many times lately the refrains of “more than a workout” and accountability.  YHC may have been looking forward to a nap in the car with the falling rain or not being out and running around on the wet pavement solo.  But Chopper and Midriff showed up and held him in accountable and again proved that you might be out there for others, not just for yourself.  Who do you need to be present for in the near future?

(YHC is also grateful that the Road Warriors from Mecklenburg County didn’t go full Legion of Doom on him and gouge his eye with a spike.) 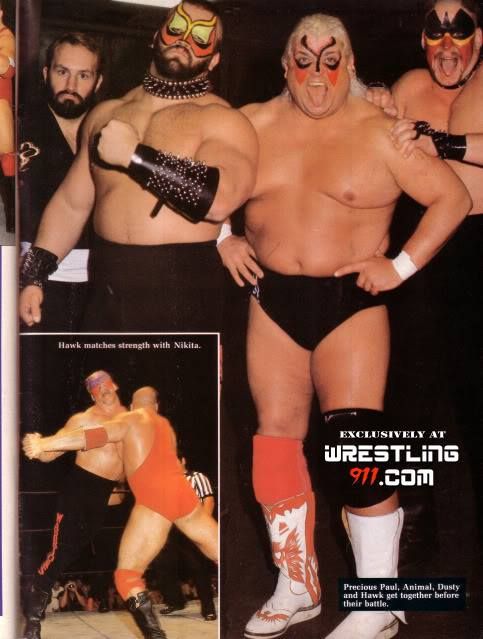